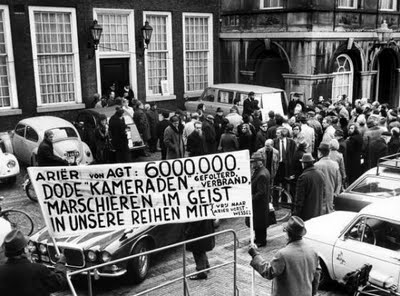 War in Parliament (WIP) is a mixed demonstrator and data curation project that aims to make the OCR-ed scanned image collection of the proceedings of the Dutch Hansard (Handelingen der Staten-Generaal 1930-1995) available as a fully annotated semi-structured dataset compliant with the CLARIN infrastructure. Moreover, it provides an advanced search engine in order to make it possible to carry out historical and social science research. In this project were looking at references to WWII to answer the question How parliamentarians used these references in parliamentary discourse?

The results derived from War in Parliament invites scholars to think about the differences between traditional history and historical research in the new digital era. To what extent will this new methodology change historical research? And in addition, will a digital approach contribute to improvements in the valorisation and reproducibility of historical scholarship?

The WIP project has made extensive use of XML technologies to transform the OCR-ed scanned images of the Dutch Hansard into a semi-structured dataset. Implicit information within the text, such as standard phrases and certain visual cues, were used to transform the otherwise 'flat' texts into hierarchies of topics, scenes, speeches and paragraphs. Databases of Dutch politicians and political parties were created from publicly available sources and used to annotate 98.5% of all speeches from 1930-1995 with a speaker name, role, and party affiliation. All datasets are made available in validated XML formats through EASY DANS, and can be queried with the use of XPath expressions or the powerful XQuery language. A search engine was developed for easy text searches, with the ability to restrict output by speaker name, party, date range, and other criteria.

WWII has been the most powerful benchmark of political morality in post-war Western societies. Political elites were in permanent need to relate to the defining experiences of warfare, political oppression and genocide. War in Parliament entails a study of the impact of WWII in post-war political debates and decision-making in the Netherlands. The assumption is that an analysis of parliamentary debates will reveal how the political elites constructed narratives evoking the wartime past of their nation to make sense of the present. A case study of the debates surrounding the Dutch party the ‘Boerenpartij’ (Famers Party) will shed light on the way references to WWII are used within the political discourse, and at the same time demonstrate the power that the information sciences can bring to historical and social science research.

The Boerenpartij (Farmers’ Party) was the first political party from the far right that entered Dutch parliament after WWII. The Boerenpartij is remembered as being stigmatized by the traditional political parties as ‘wrong’ (‘fout’) as National Socialism and its supporters were dubbed in the Netherlands). However, no systematic research has been conducted on the question how frequently and for what purpose these connections were made with the ‘wrong’ past. To put it differently, we investigate whether and if so in what way the Boerenpartij was linked with Fascism and National Socialism. We developed a set of search queries to match against our data (the Dutch Proceedings) in order to obtain our results. For further information see: Hinke Piersma, Ismee Tames, Lars Buitinck, Johan van Doornik, Maarten Marx ‘War in Parliament: the Nazi-past used as a political weapon’ (published next year).

In the near future we hope to broaden our research questions to establish and analyze patterns and trends, and to answer questions how WWII discourses have evolved over a longer period of time. In this respect we may contribute to Dutch historiography on WWII. Dutch historiography on the aftermath of WWII shows that the persecution of Jews comes more and more to the fore in national discourse towards the end of the 1960s perverting the ‘old’ paradigm of the Netherlands as a country of strong resistance to the German occupation. Is this paradigm change reflected in the parliamentary debates?

Historical research often focuses on well known debates and events. For example when historians analyze the ways in which references to WWII are used by politicians in the Netherlands they will more or less automatically turn to debates on the ‘Drie van Breda’ (1972) or the fall of Willem Aantjes (1978). This method risks overlooking less well known debates in which references to WWII were used to support political views. With the research engine developed in this project we are capable to unearth forgotten and unexamined debates, thus contributing to new insights into the legacies of WWII.